My lord how time flies. July was a month and a half, honestly. Big ups and big downs in my emotional heart, but I’m in a good place now – I think? When my summer classes end in about a week I’ll be flying to China, where I’ll spend 2 weeks with my family eating lots and lots and lots of food, before coming back for the start of the fall semester where it’ll be full steam ahead.. I’m a little bit apprehensive about the load of work I’m taking on, but hopefully it’ll be manageable or, if it’s not, I’ll be OK with taking some things off my plate – that’s something I’m really bad at, saying no and admitting I can’t handle everything as well as I’d like. Anyway, July had some really good times, when I laughed so hard my boyfriend massaged my cheeks afterwards because they hurt from it all, and also perhaps five (5) occasions where I cried in my car. So thanks, July. It was rl. 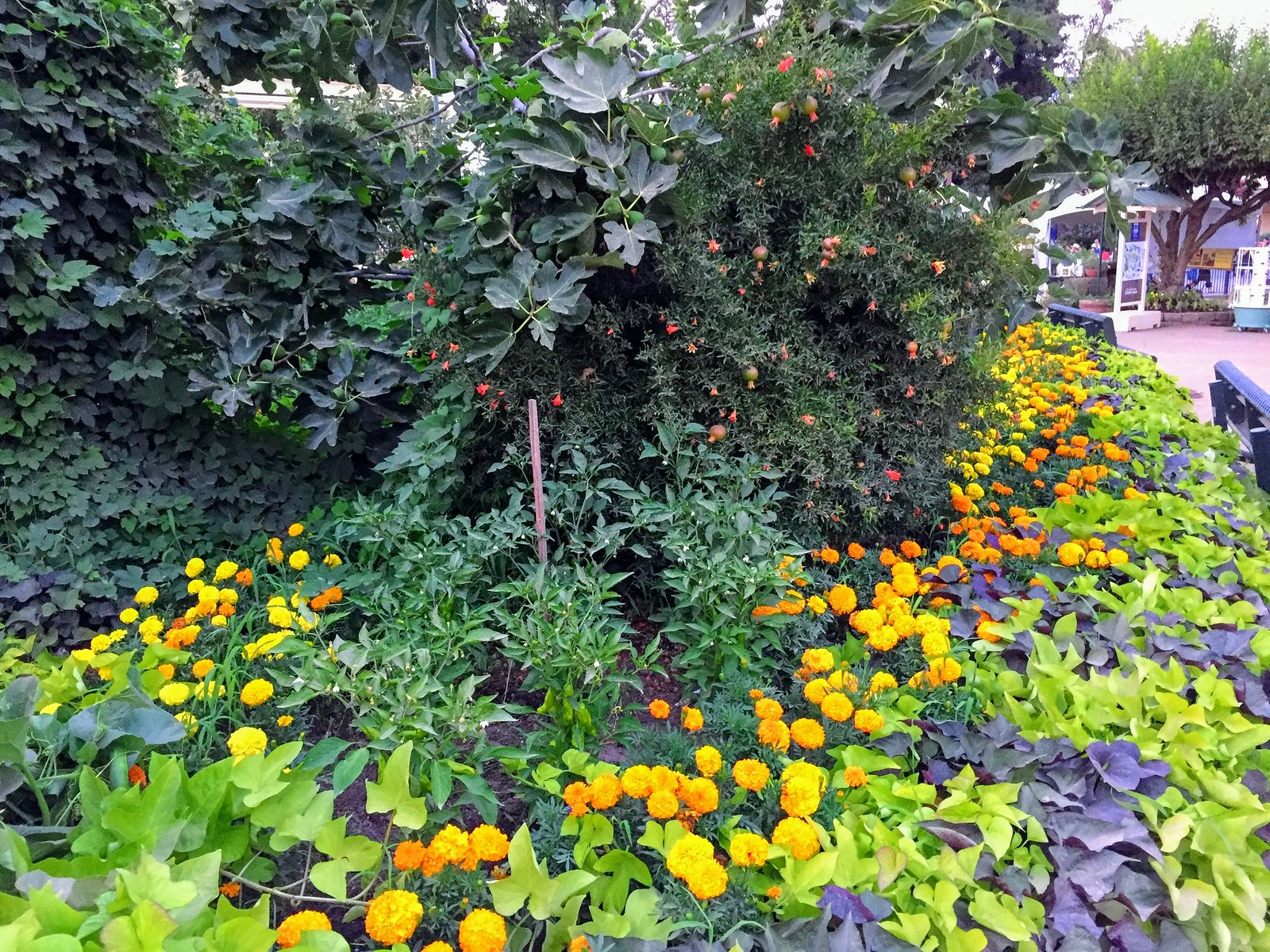 Each year during the summer, CA puts on its state fair! My family used to go every year when I was younger, but I haven’t been since I was maybe 12 or 13.. My boyfriend Jose’s from Southern California, so he’s never been since it’s up north in Sacramento, and we thought it’d be a nice thing to do for his birthday weekend 🙂 I’m never sure how much to explain or assume people might know, but the main things the fair has are the usual fair rides, musical performances, produce farm, super greasy oily salty food, exhibits on things from fine art to science, and most importantly to J and I, ANIMALS!! We met some llamas and goats and cows and baby pigs and it was so so so exciting. 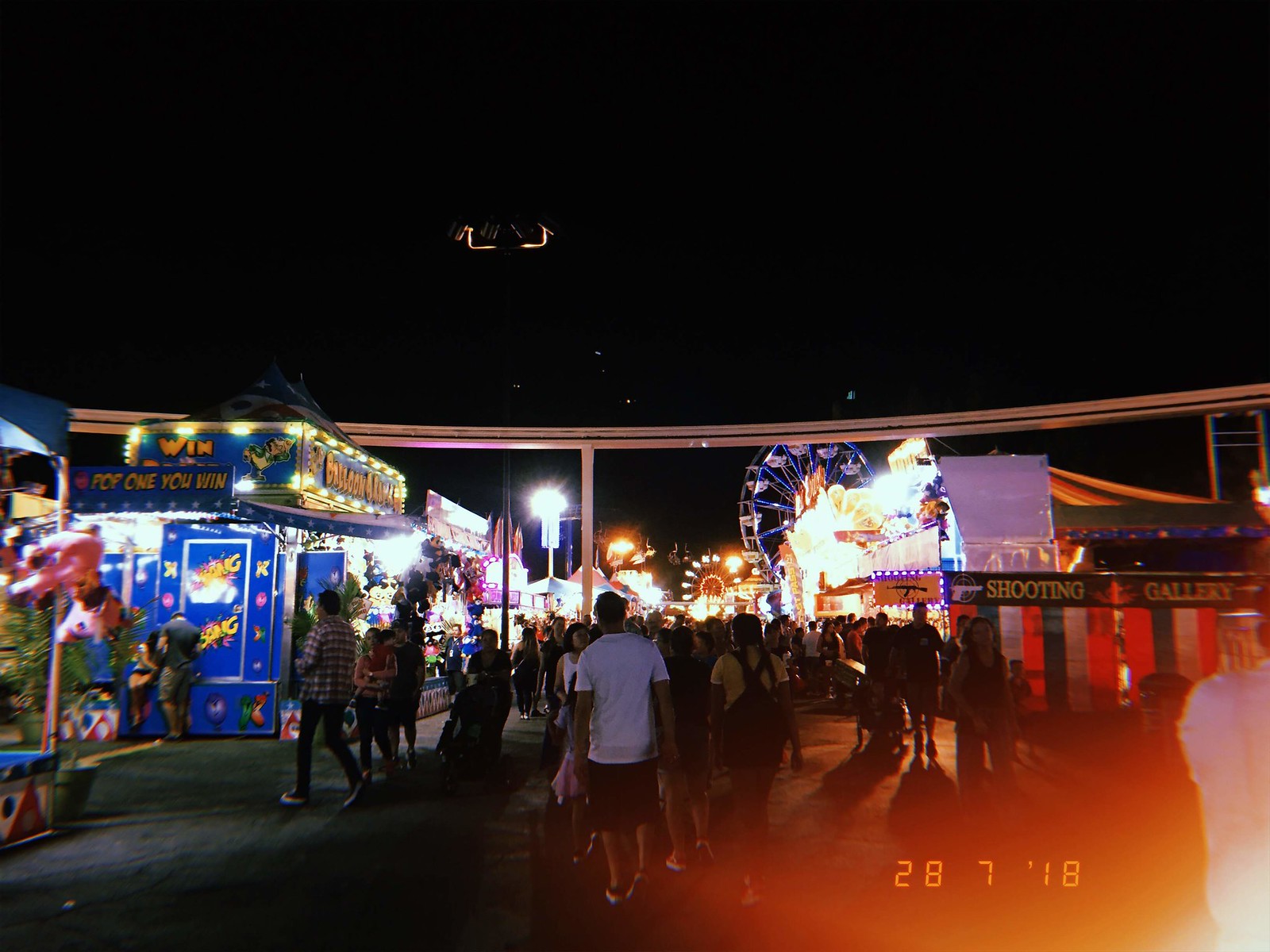 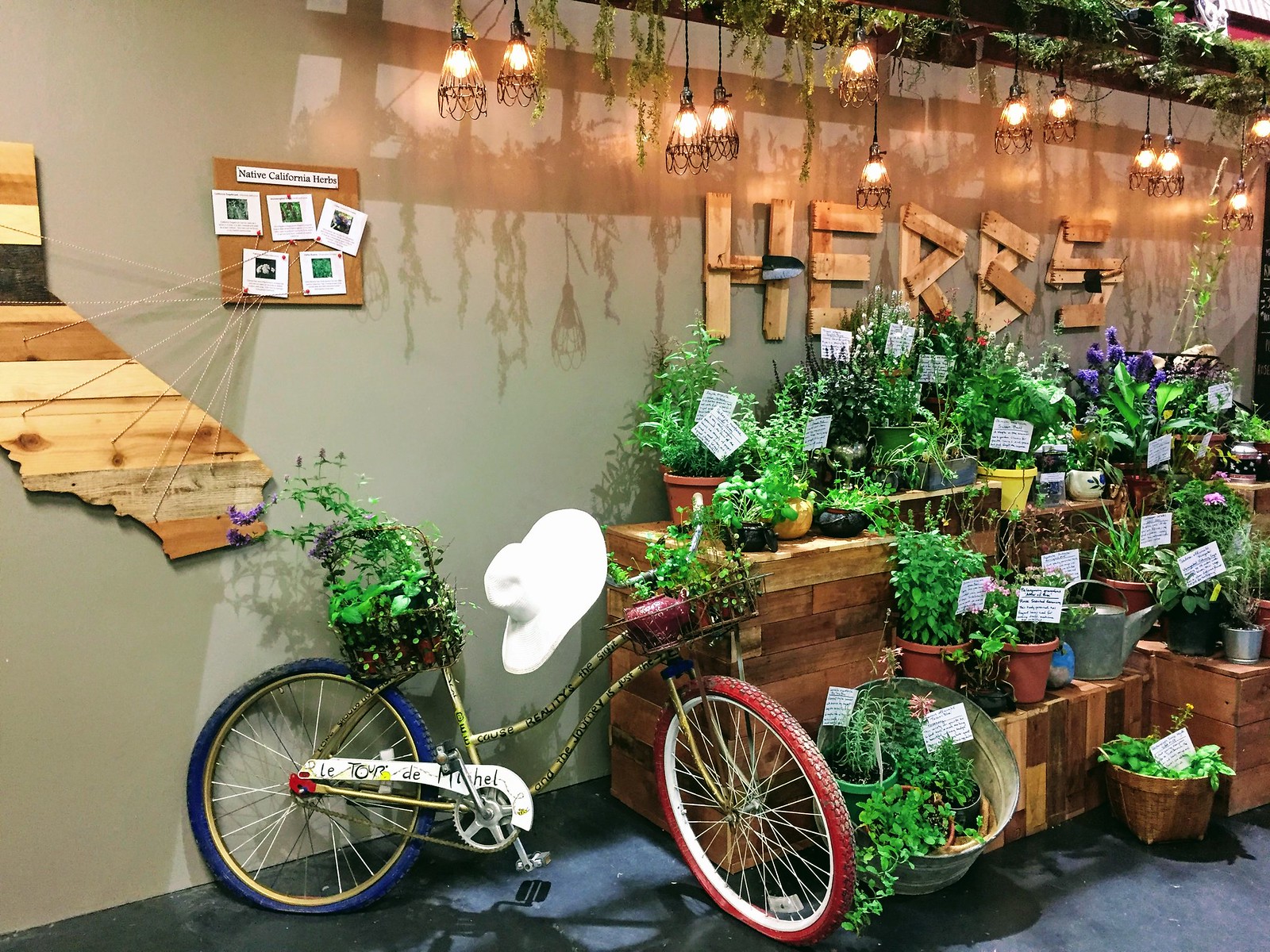 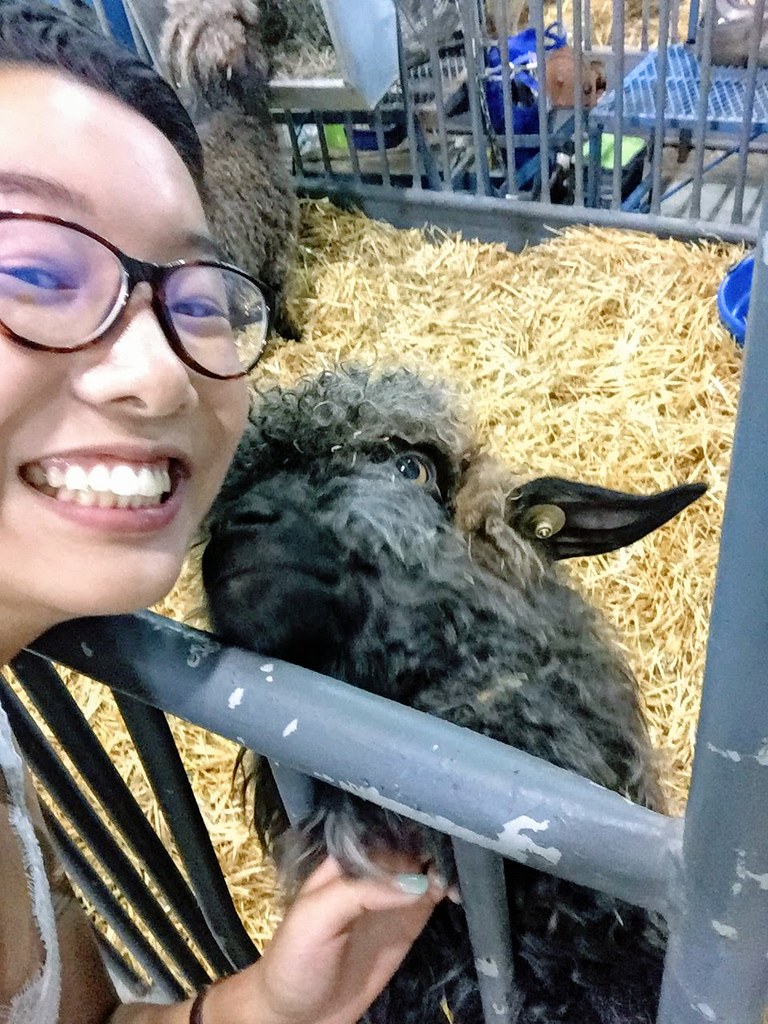 This mama goat came right up to me!!! Look at how beautiful she looks. I mean, omg. Blessed, honored, etc etc. 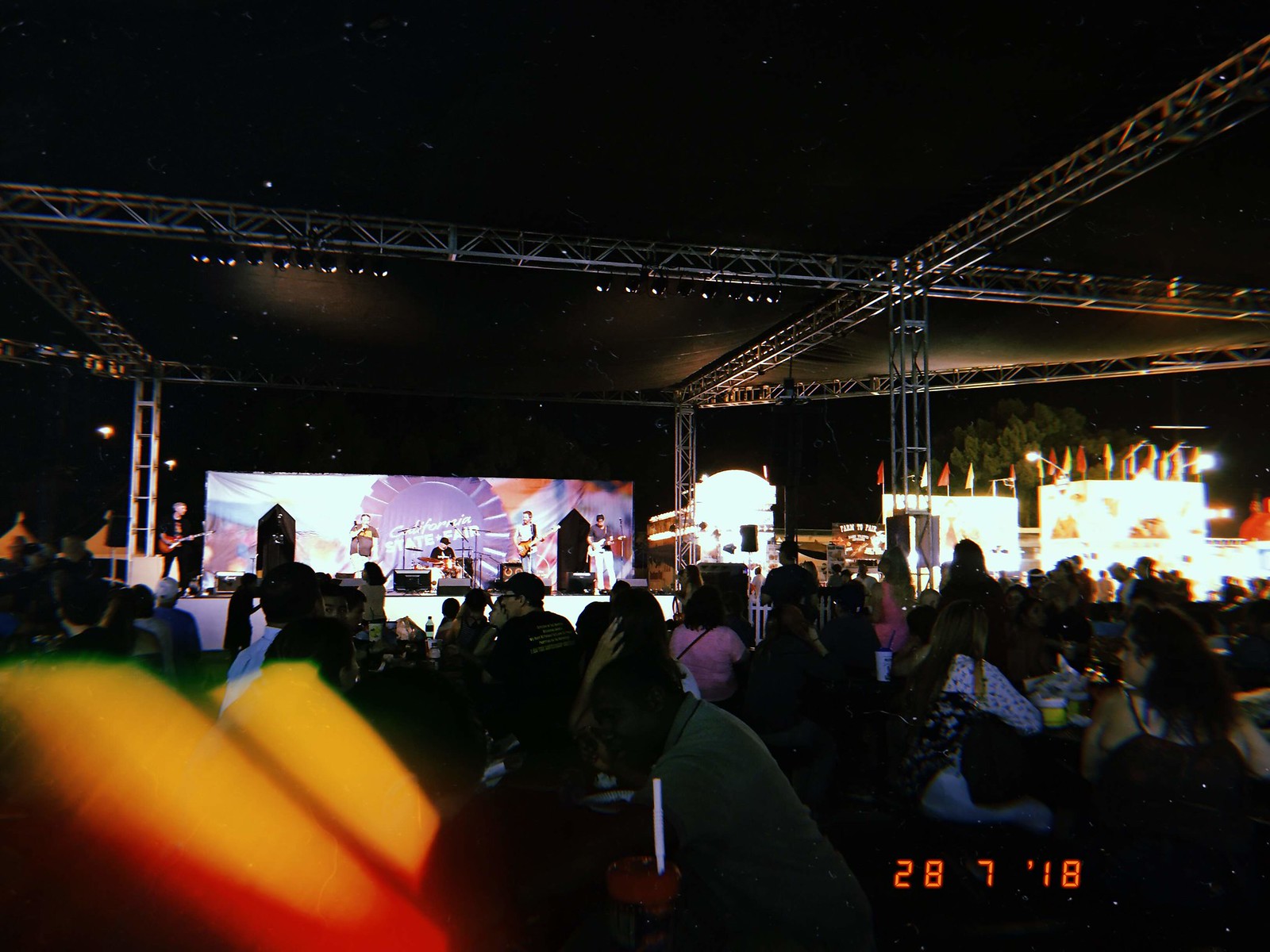 If you live in California, I think everyone should go to the state fair at least once. It’s our great state and it’s like $15 and it’s not a bad time. Go see the llamas!!!!

Something I tried to really do during the spring semester was speak up more in class. I wanted to really consciously try and do that because I have a lot of things to say, but I’m often afraid to do so. Thanks @ my anxiety about everything, including public speaking and confrontation!! It’s also really important for professors to hear from you, as a letter of rec is so much better when you’re not, like, the hermit in the back corner who never ever spoke.

I noticed that many of the comments made in class were made by guys, often white. They’d often dominate discussion and umm their way through it and at the end go “Oops, sorry, I lost my train of thought, I don’t know where I’m going with this anymore, never mind” and I would be like 🤷🏻‍♀️🤷🏻‍♀️ THANKS CHAD I paid good money for this class and you’re taking up valuable time with your shitty ‘insights’. So I started to think of it as almost a feminist responsibility, too. Larger than getting over my own fears about speaking or my personal desire to form good relationships with my instructors. My righteous petty feminist WOC ass wanted to grab the mic from a white guy and I could surely have just as much, if not more, to offer than them.

Anyway, I’m much more comfortable saying shit all the time and making my strong opinions heard in class now. I still get sweaty palmed, but I just wanted to 🙂 and high five myself a bit here. It feels good to say what I think and it feels good to see people getting uncomfortable when a smol Chinese woman is assertive. Few things rile me up more than entitled people, so few things motivate me more than wanting to challenge dominant voices in what little ways I can – like speaking up in a classroom.

Dogs: I work at a restaurant and we allow dogs on our patio and I love all those furry babies. So my coworker and I started an Instagram account to try and document them!! I was totally going to link to it here, but then I had second thoughts about sharing the exact business address where I spend a significant chunk of my time… so if you want to ask me I’ll totally give it to you but stranger danger etc etc (This guy is named Mickey and he is EIGHT WEEKS OLD!!!)

Topshop mom jeans: Jose and I went to a Nordstrom Rack and I found these mom jeans from Topshop for TEN (10) DOLLARS!!! I mean. These are like $70 normally! And they were PETITE!!!!!!! Man oh man I could scream about them for ages. The one thing I will say against them is that I’ve gained some jelly in my belly… so they don’t fit as well now as they would have a couple months ago. But still VERY EXCITING.

A Day in the Life of Marlon Bundo: In case you are unaware, Marlon Bundo is the name of our dear Vice President Mike Pence’s pet rabbit. Last Week Tonight with John Oliver made this children’s book about Marlon falling in love and getting gay bunny married. I saw it in the bookstore while I was buying my boyfriend his birthday gift, made a mental note to see what it was about later on, Googled it at home, and cried. Turns out I have a lot of feelings about darling illustrations of animals in gay love standing up to people who tell them they can’t love. Anyway, all profits go to The Trevor Project and AIDS United! It is, of course, an unabashed political parody of the other Marlon Bundo book written by the Pences (which I will not link to because we don’t want to support the anti-LGBTQ family and also it’s much less fun), but it definitely stands as a great children’s book in and of itself, with wholesome themes of love and acceptance and a cat named Pyjamas who marries gay bunnies.

Refinery29, Kylie Jenner, and the Denial Underlying Millennial Financial Resentment by Jia Tolentino: This article was written in response to a Money Diaries from R29, the Kylie Jenner ‘self-made’ Forbes cover, and a New York Times real estate story, and it’s a really well-written commentary on what financial privilege, what “American wealth is and what it really means”, and how that interacts with young women and whiteness.

Technological struggz: This month my car broke down, we had to get it fixed, and it took forever, and apparently it was a really rare battery problem that could have exploded into fire at any time sooo0o0o that wasn’t fun to deal with. I also spilled water on my laptop (it’s OK tho! Typing on it as we speak) and dropped my phone in a bowl of guacamole, which is a really dumb sounding thing to say when you’re trying to explain to someone why your phone’s having trouble beeping. And I crashed into a family friend’s car while I was reversing out of our garage and didn’t realize they were parked there. Idk, I think my head’s just not all been there??

Not mindful shopping: I bought a couple clothing items this month that I reaaaaally should not have. They’re cute, to be sure, but I really did not need them. Why am I such a consumer of shiny things and discounts. Why. How can I stop. Ugh.

The search for a therapist: I’ve been trying to find a therapist and resume doing that regularly, and I did not realize how hard that is. I’m, like, searching on my health insurance website for in-network providers, calling and emailing and not getting replies, and I feel like the Hamcat sticker on Facebook that’s like “UGH!” I”m just trying to take care of and improve upon my mental health toolbox, y’all. Pls call me back so I can do that..?!

5. from the camera roll 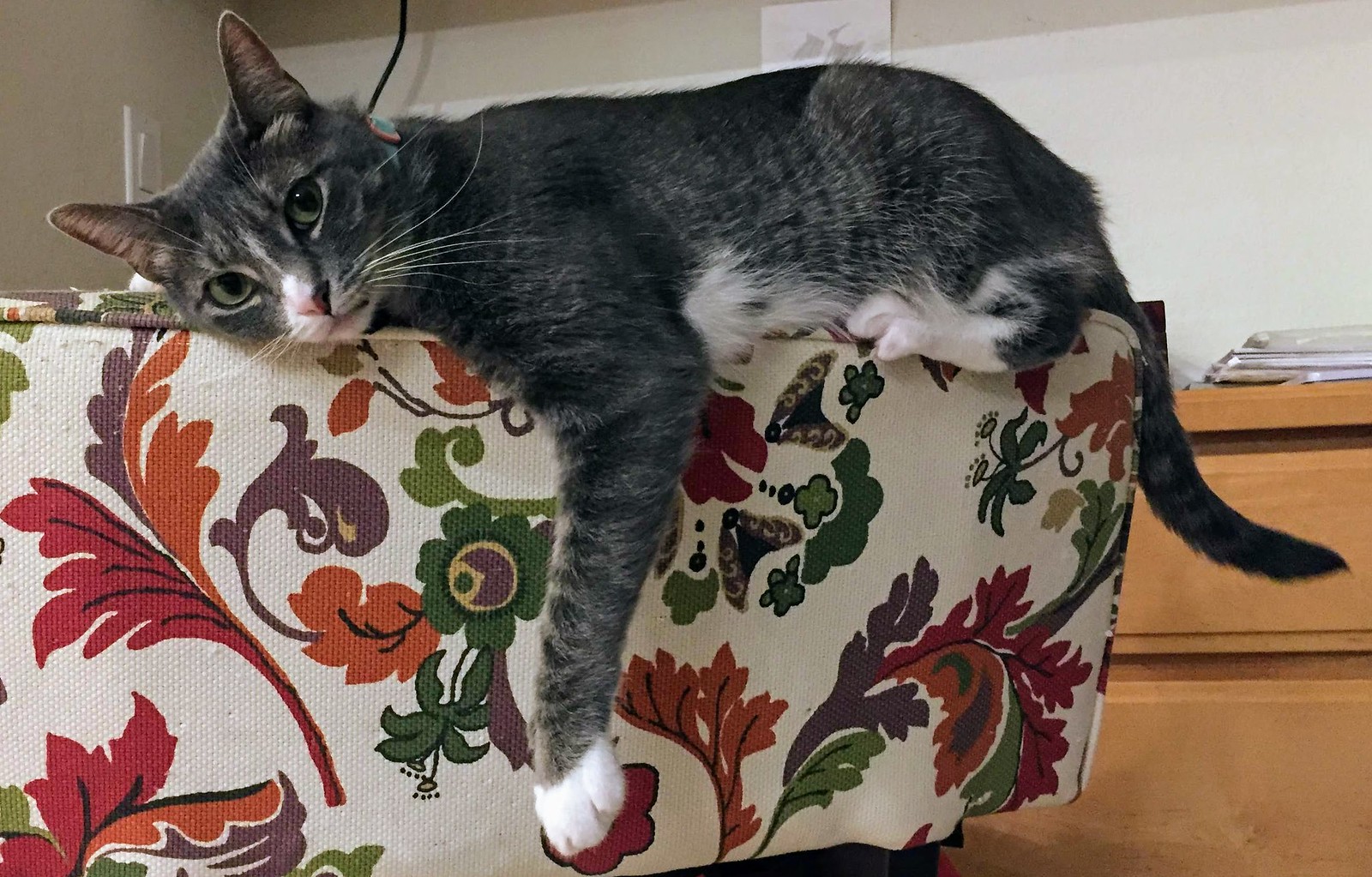 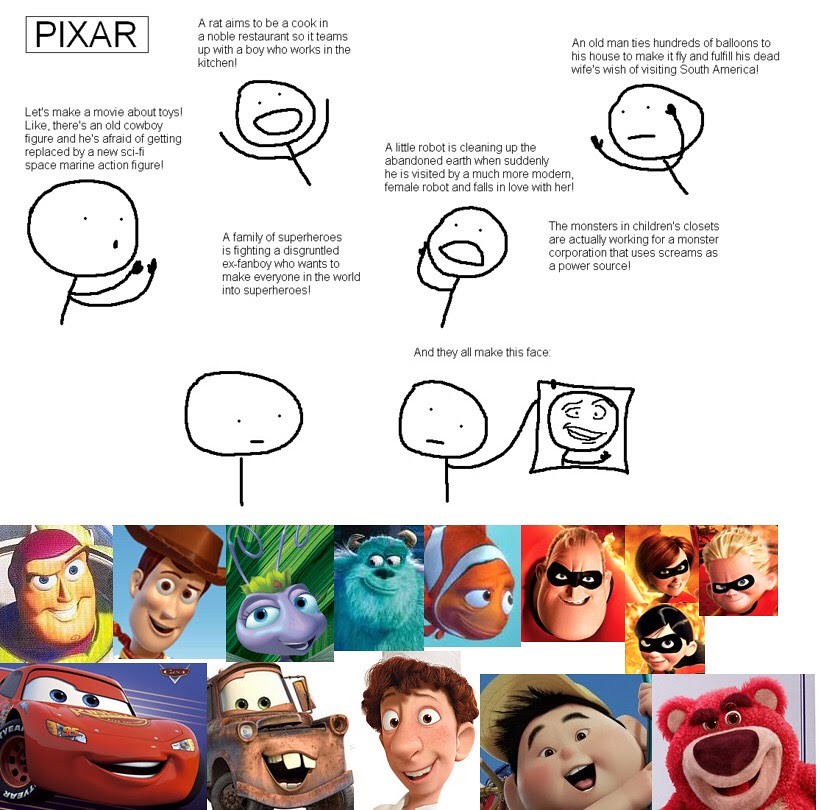 My boyfriend sent me this meme and I laughed a lot! (This is obviously a sentence I say very often.) So here it is. I love this face. I love Pixar. 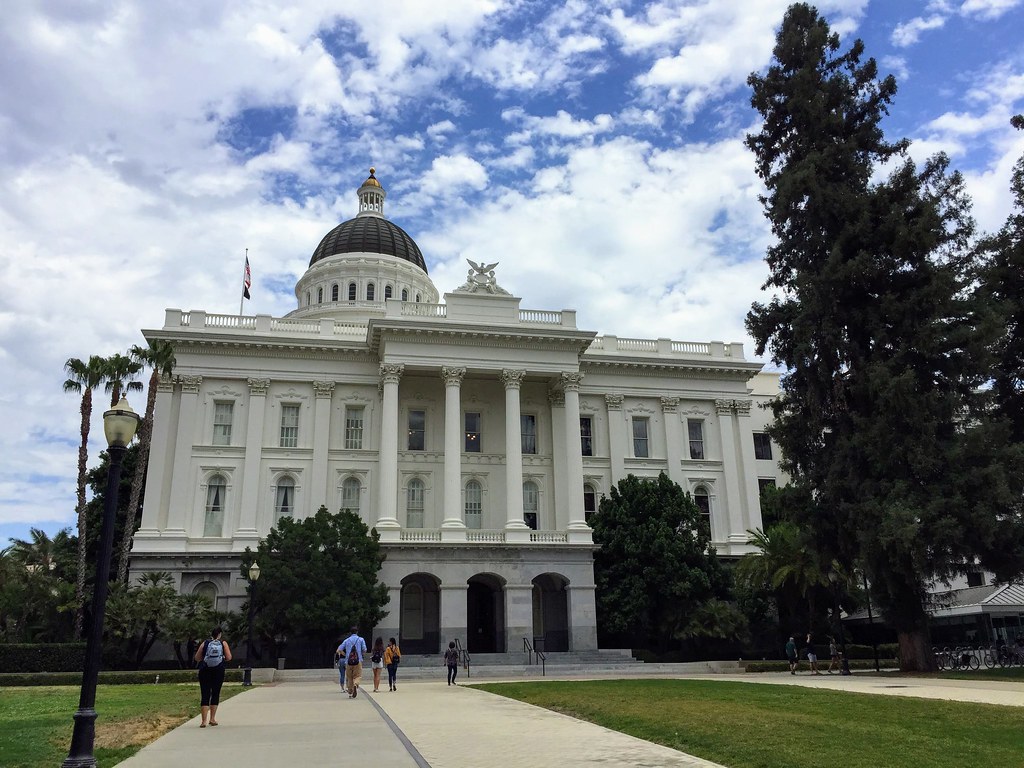 Our great state of California’s capitol!!!!! I intern for a state senator and I’m usually in our district office, which is a lot less photogenic (think windowless dreary building), so I’m always excited when I get to go to our capitol office and see trees and sunlight. 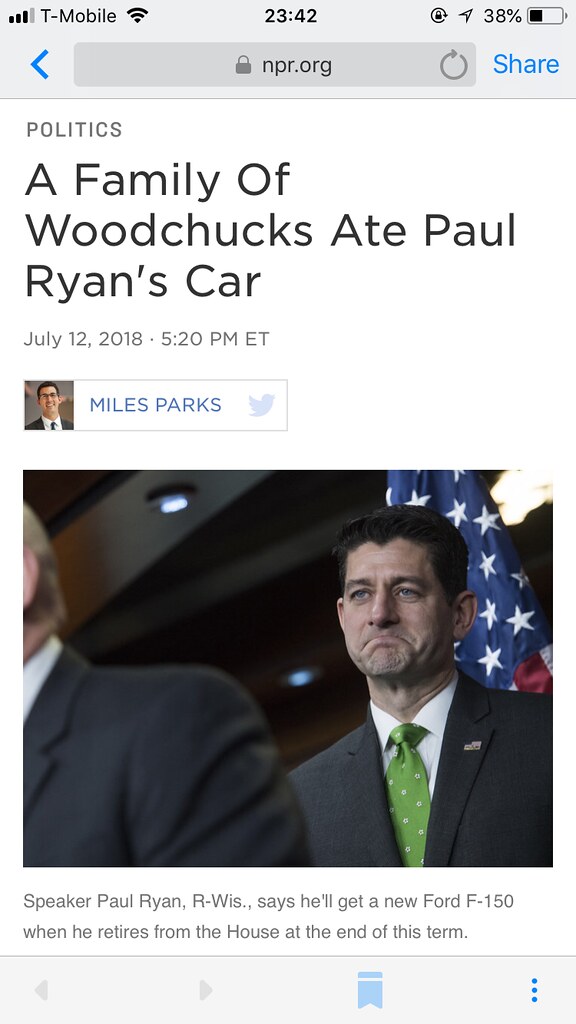 DOIN’ THE LORD’S WORK!!! WOODCHUCKS OF WISCONSIN WE THANK U ALL!!! 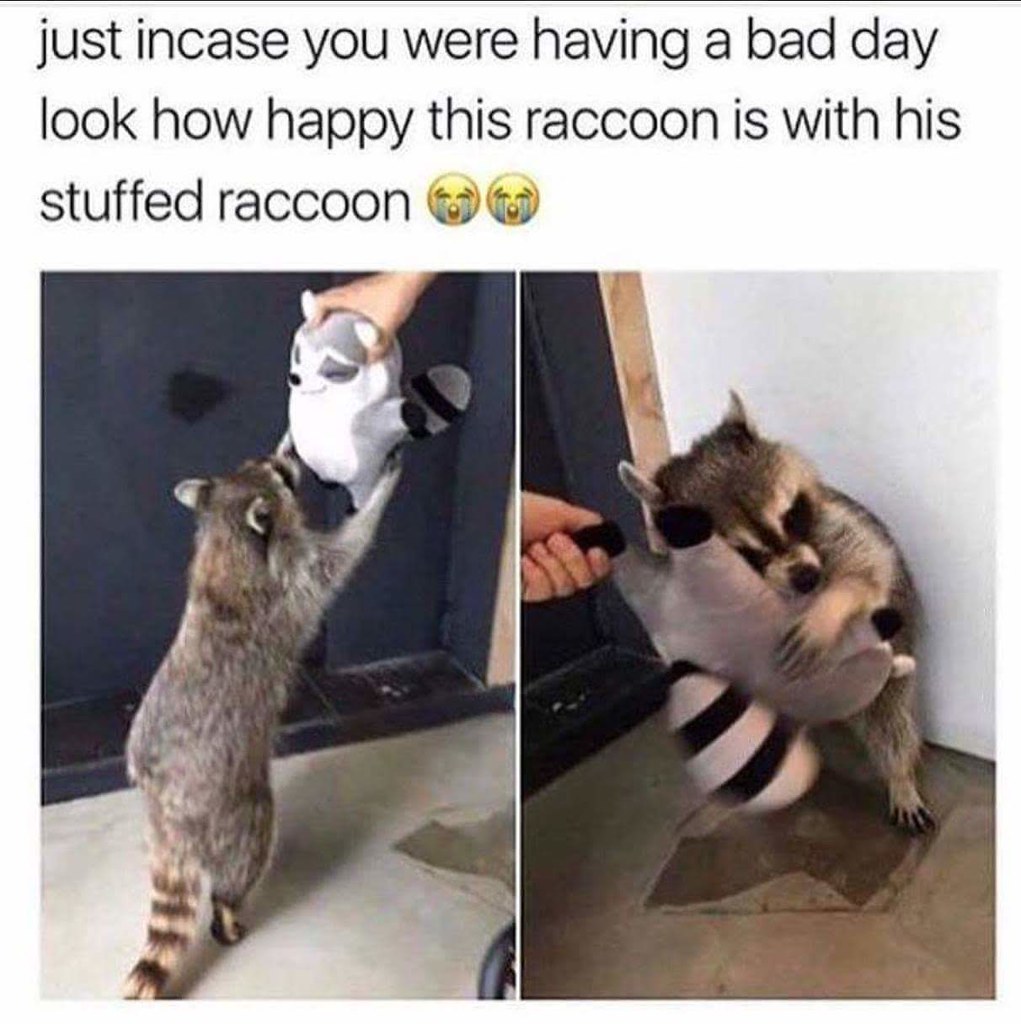 Jose (that’s my boyfriend’s name, idk why I talk about him here and just call him ‘my boyfriend’ because he has a name) and I think raccoons are so so so cute. 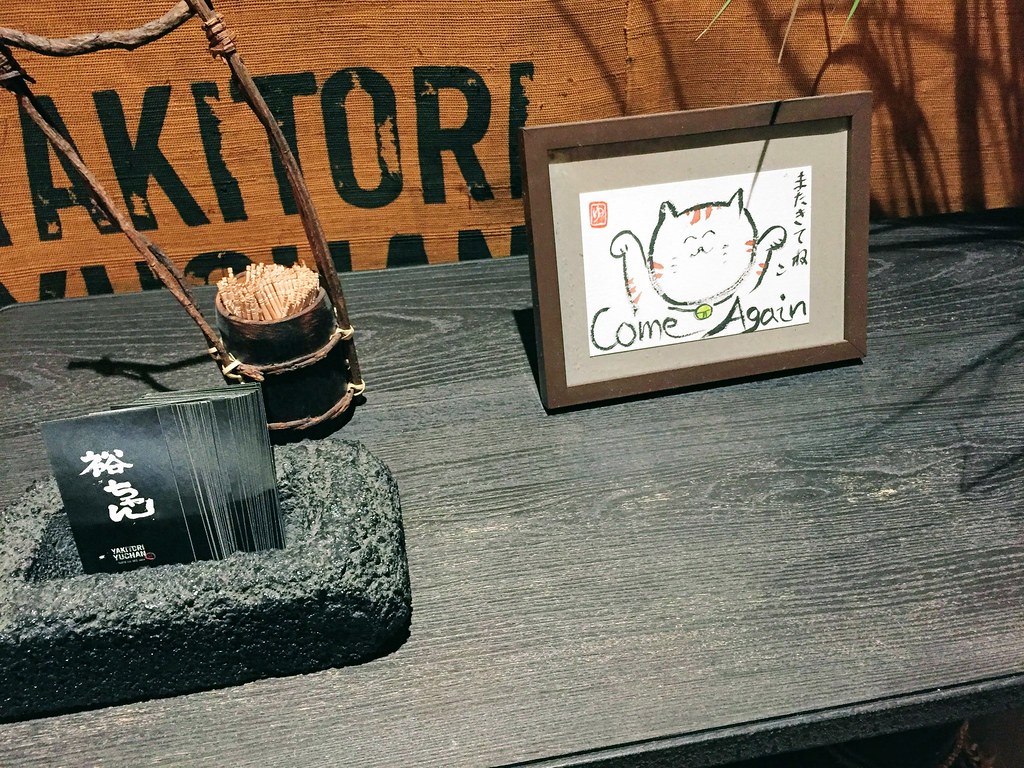 I’ll leave you with this cute fat cat painting from a ramen dinner, inviting us to come back for more and you to come back and hang out with me again!!

3 thoughts on “july 🐶 month in review”