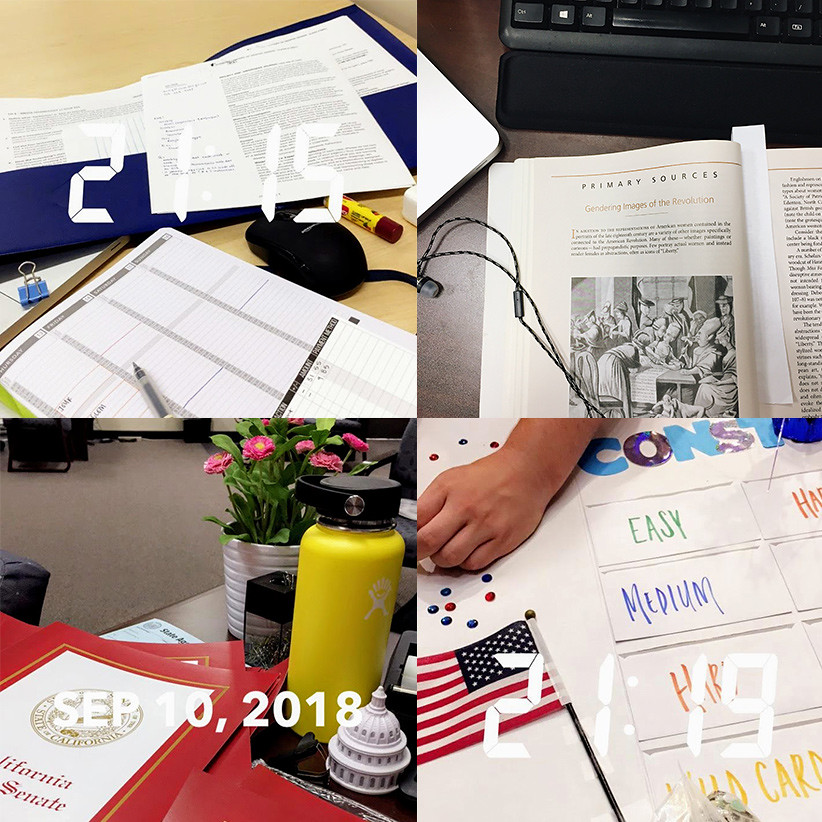 I use this planner with a section at the end of every month with questions for you to ~reflect~*, and the first question is always “What was the most memorable part of this month?” Sometimes the thing I go to is a single event, like a trip I took or a project I was working on, but this month the thing I thought of was just a return to school/work/normal life after summer. 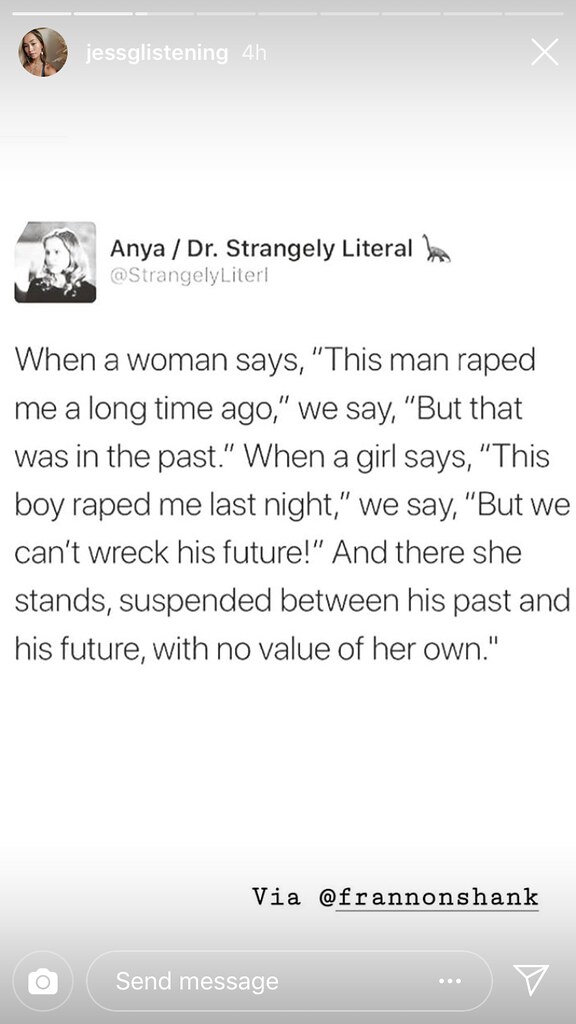 2. everything is awful in american politics, part 972642 volume 392 edition 83, revised and adapted for a contemporary audience

It’s hard to ignore what’s been going on, and as a young woman and a person who, like, cares about justice and being not a dick, it’s so hard to not want to shrivel up into a prune of rage. There’s no more that I can say about this that hasn’t already been said in better ways, but man am I crushingly disappointed in this country’s governing system that a man who has lied in his testimony and acted so disrespectfully, with the demeanor of a crushed beer can in human form (creds to John Oliver for that on point description), is going to be elevated to a life term on the highest court in the land by Senators who give their thoughts and prayers and then vote to confirm him anyway. If you’re American, please go to Vote.org where you can check to see if you’re registered, find out how to register, and learn about what the fuck is going on and what we can all do. November’s coming up and the midterms are a way to use our voices with our votes because the only thing worse than crying in despair is crying in despair while not doing anything about it.

Steven Universe: My boyfriend and I have sped through this TV show and I would give my whole damn heart for it. It’s about a boy named Steven and his adventures with his lesbian space rock moms, and I’m afraid I’m not sure there’s a more concise way to describe it without sounding even more confusing. Steven and the Crystal Gems (they’re actual alien rocks from space) get into hijinks and protect Earth, and along the way there’s stories of love, friendship, family, life, and a whole bunch of fun songs and he has a pink pet lion. It’s the best goddamn show with these stunning backgrounds (I love this article from The Atlantic that talks about that) and each episode is only, like, eleven minutes long soo0o easy to do a couple at a time or, you know, seventeen lol. It’s on Hulu if you want to watch!!

Out in the Night: I watched this for my sociology class and it’s a really important story that I had never heard about about these four young women who are out late at night in New York City. They’re all black and lesbian and as they walk down the street, a man threatens them and they fight back. All four of them end up in jail. It’s a devastating story where nobody really wins, and just illuminates the importance of examining how our justice system and media criminalizes black women for just, you know, being. I watched it for free on Kanopy and I think most educational institutions give students access to that, but otherwise I think you have to pay to rent.

Muji eyelash curler: Using an eyelash curler is that thing that people always swear they never leave the house before doing, even if they do nothing else makeup-wise that day, because it just ‘opens up your eyes and makes you look so much brighter!’ Anyway, I got one a while ago from Amazon and it didn’t work well bc my eyes aren’t white people shaped. I got this Muji one while I was in China and it fits my eyes much better! There’s a little bit of pinching that happens sometimes, but I think that has more to do with me being bad at makeup and always in a rush/not careful and my teeny tiny eyelashes. The recs for eyelash curlers that are good for Asian eye shapes are always the Shu Uemura or Shiseido ones (or even the Kevyn Aucoin one) but that shit is $$ and this was only $ so in case you’re in the market for a cheaper eyelash curler for smol eyes!

Luna + the vet = 😦 One of Luna’s eyes has been watering, so I took her to the vet and she hates being in the car. It’s a five minute drive from our house to the vet and she was yowling the whole time; I felt awful. The vet said she might have herpes, but it could still be something else so I have to squeeze this ointment in her eye for a week and check back in with the vet for the final verdict. She hates that too and is unhappy with me when I do it, so I haven’t been doing it consistently but I really fkin need to!! It’s for my bb’s own good 😔 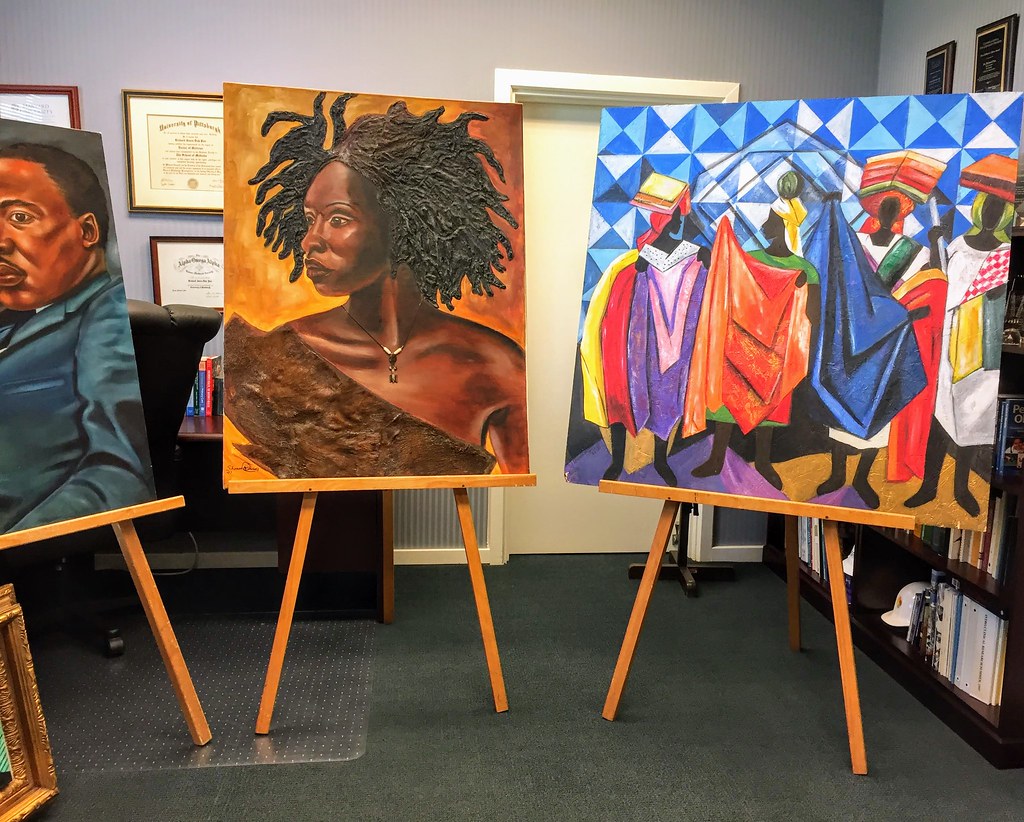 So I intern in a political office and helped put together this event to celebrate local art, including these paintings loaned to us by the Sojourner Truth African Heritage Museum in Sacramento. There were so many beautiful paintings in the office, but this one below of protest was my favorite. Love a good blue and yellow moment, and I love this style. 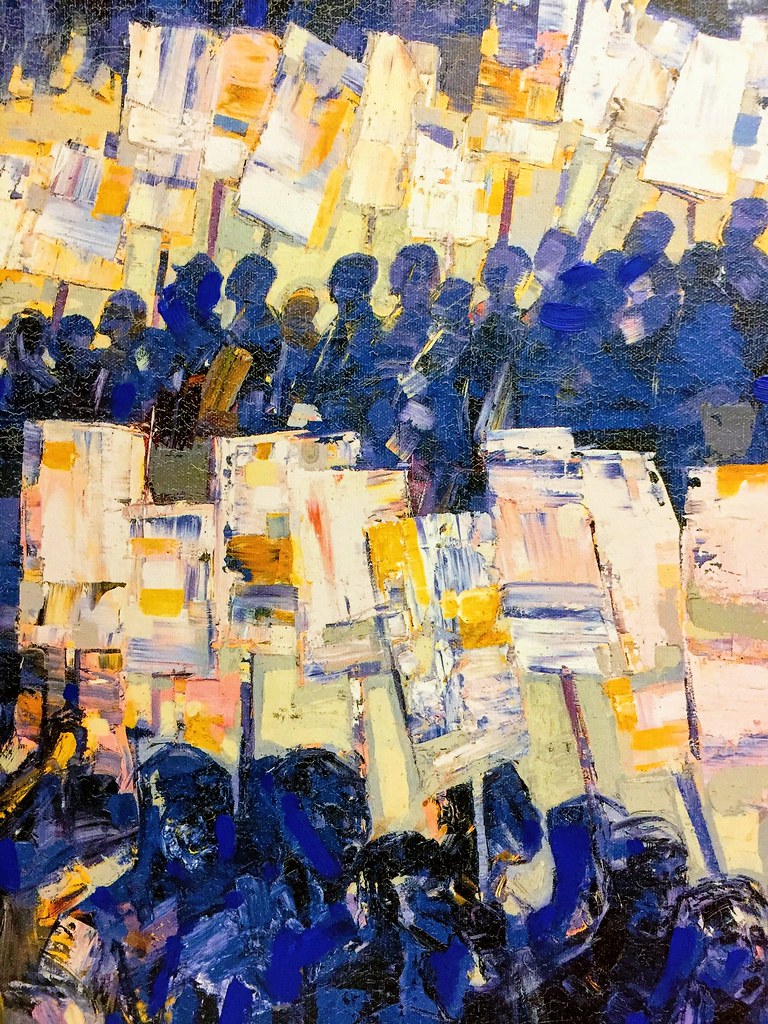 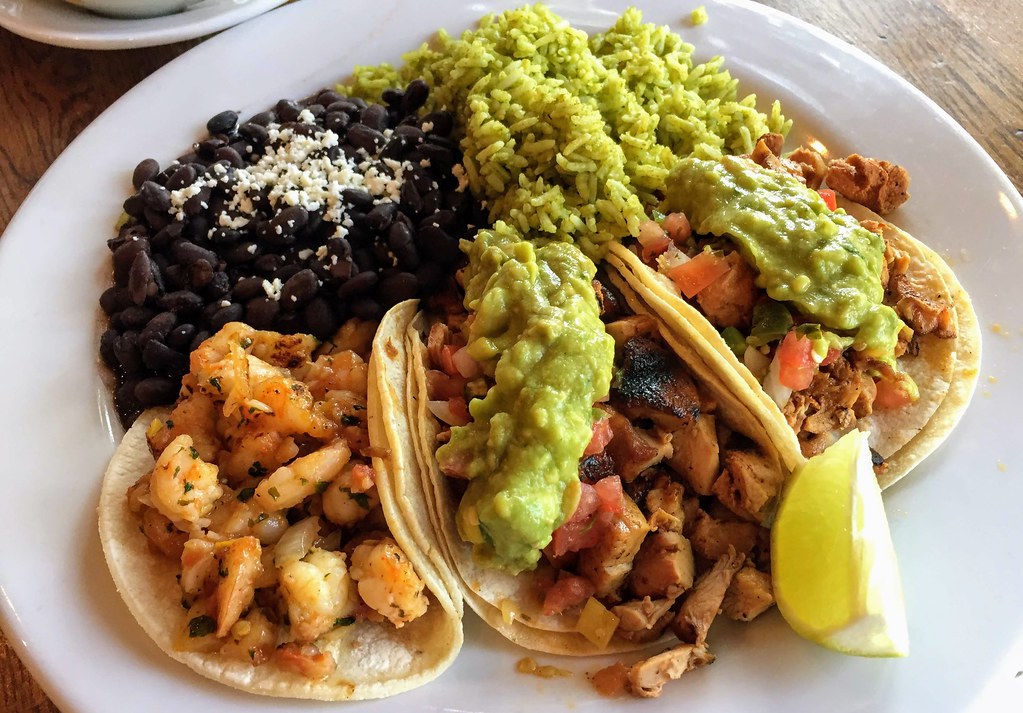 I always want to order the same thing every time but I always feel like that’s boring, so I tried to be adventurous and ordered a shrimp taco. I didn’t like it and should just stick with what I like and stop beating myself up for wanting the same thing forever lol 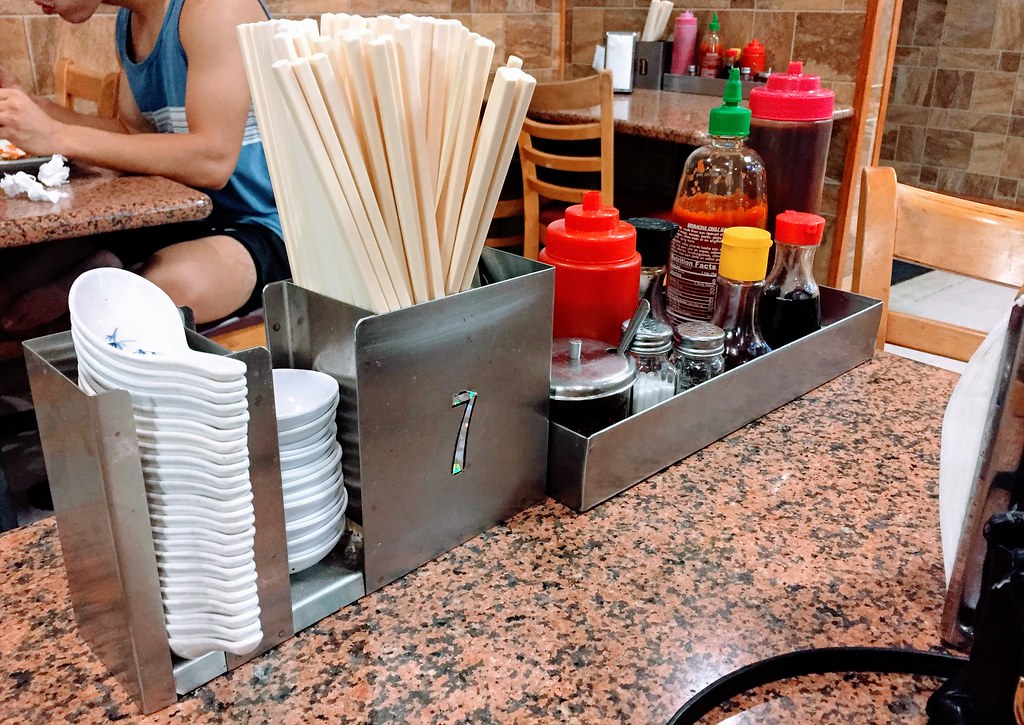 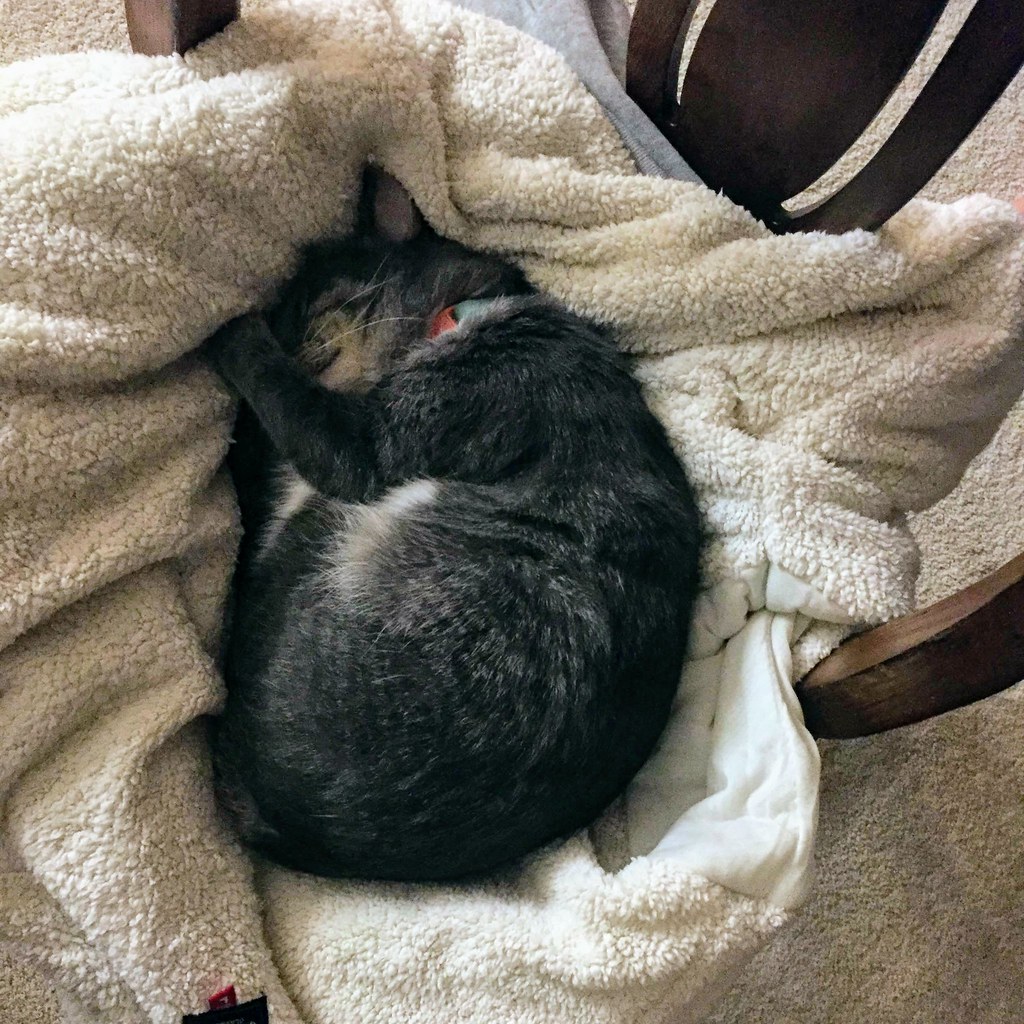 I stole a hoody from my boyfriend and then Luna stole it from me, but he can’t ever get it back bc look at this little darling booboo oh god 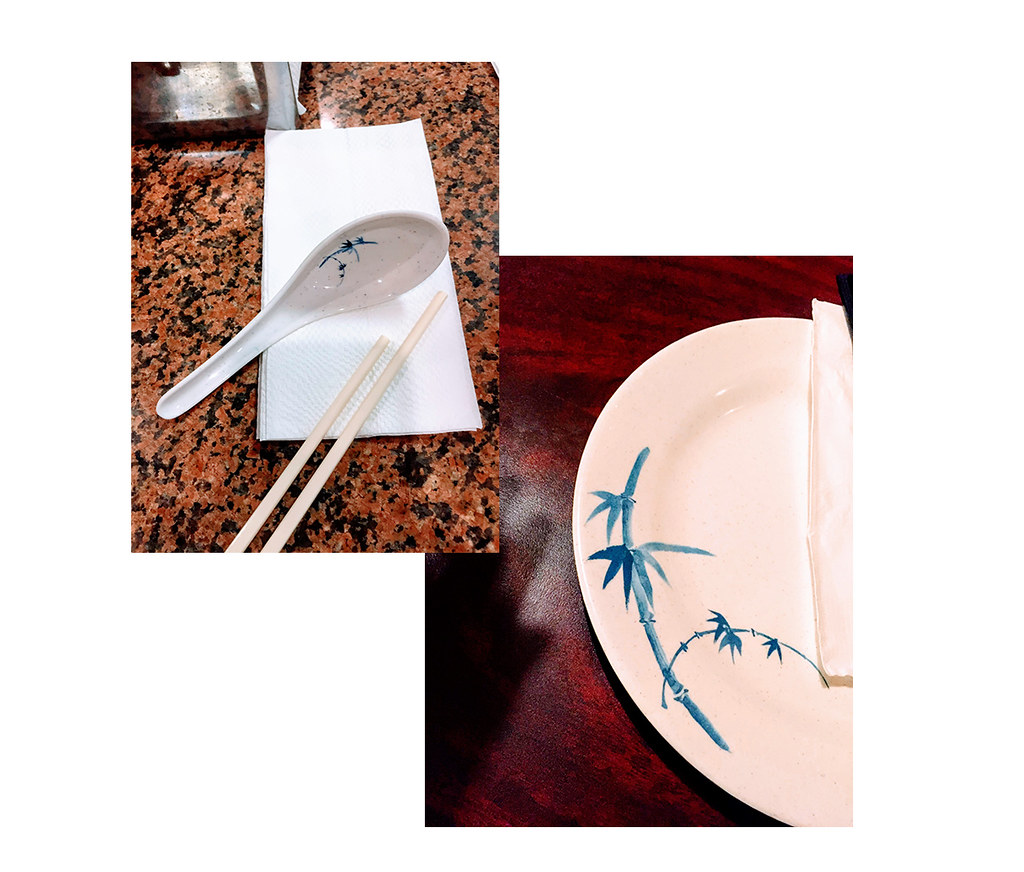 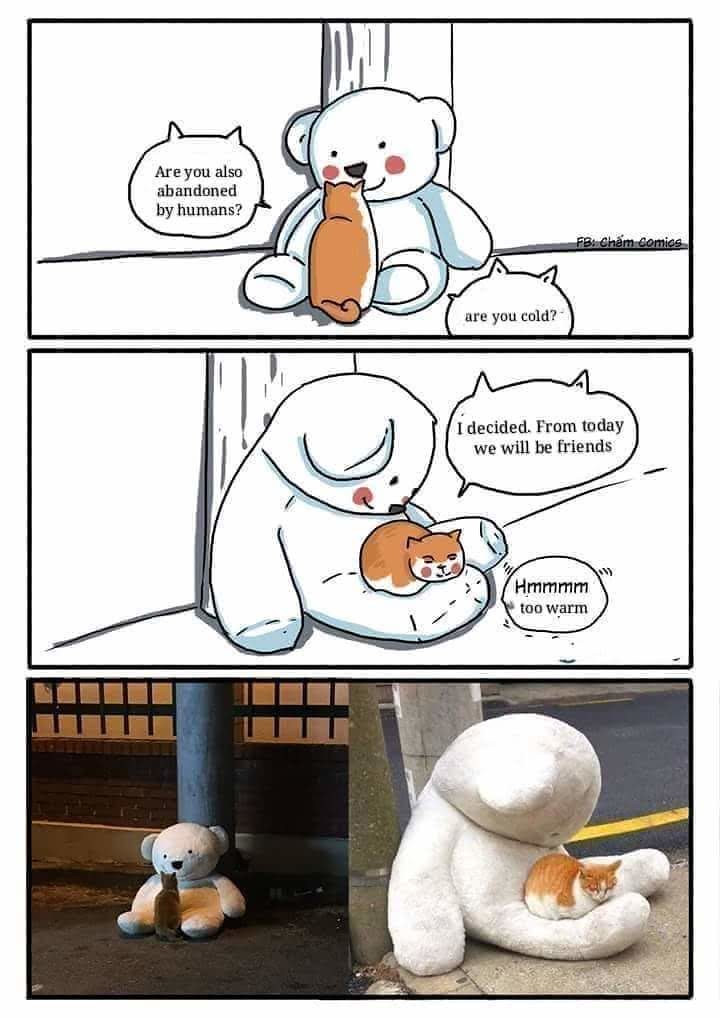 For your bittersweet crying pleasure ^ 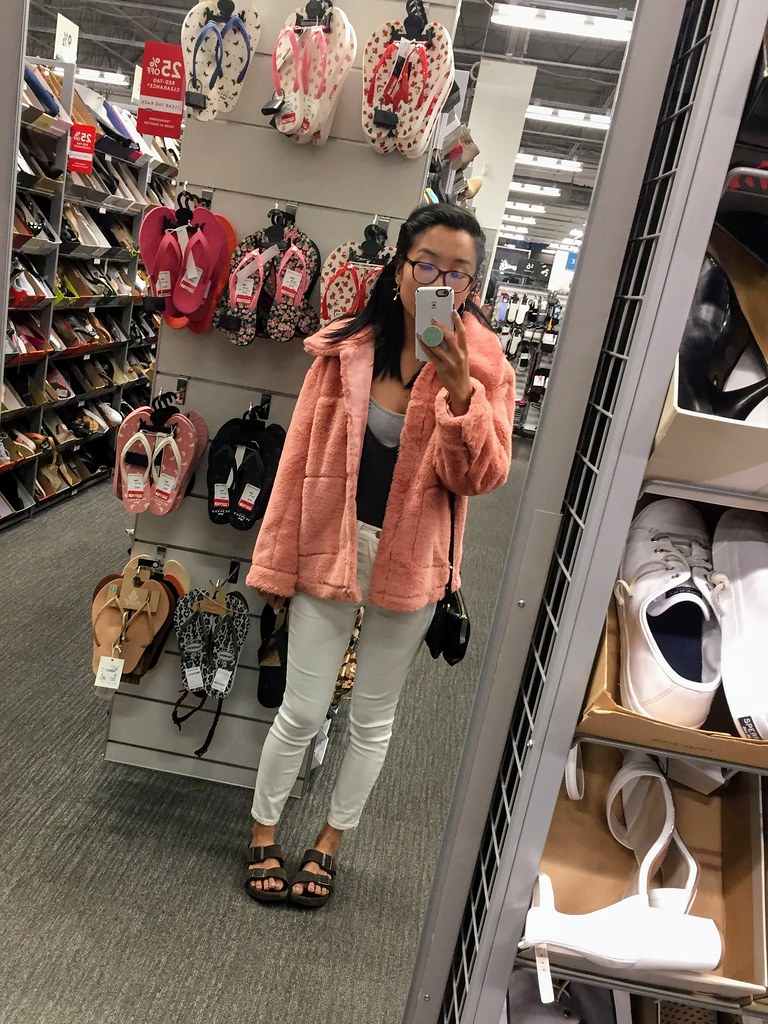 This beautiful pink furry jacket at Nordstrom Rack was $50 and very impractical for someone who has trouble wearing color… but god did I want it. GOD DID I NEED IT!! They also had it in a baby blue and a bright red, but I was really into this pink (very out of character for me). 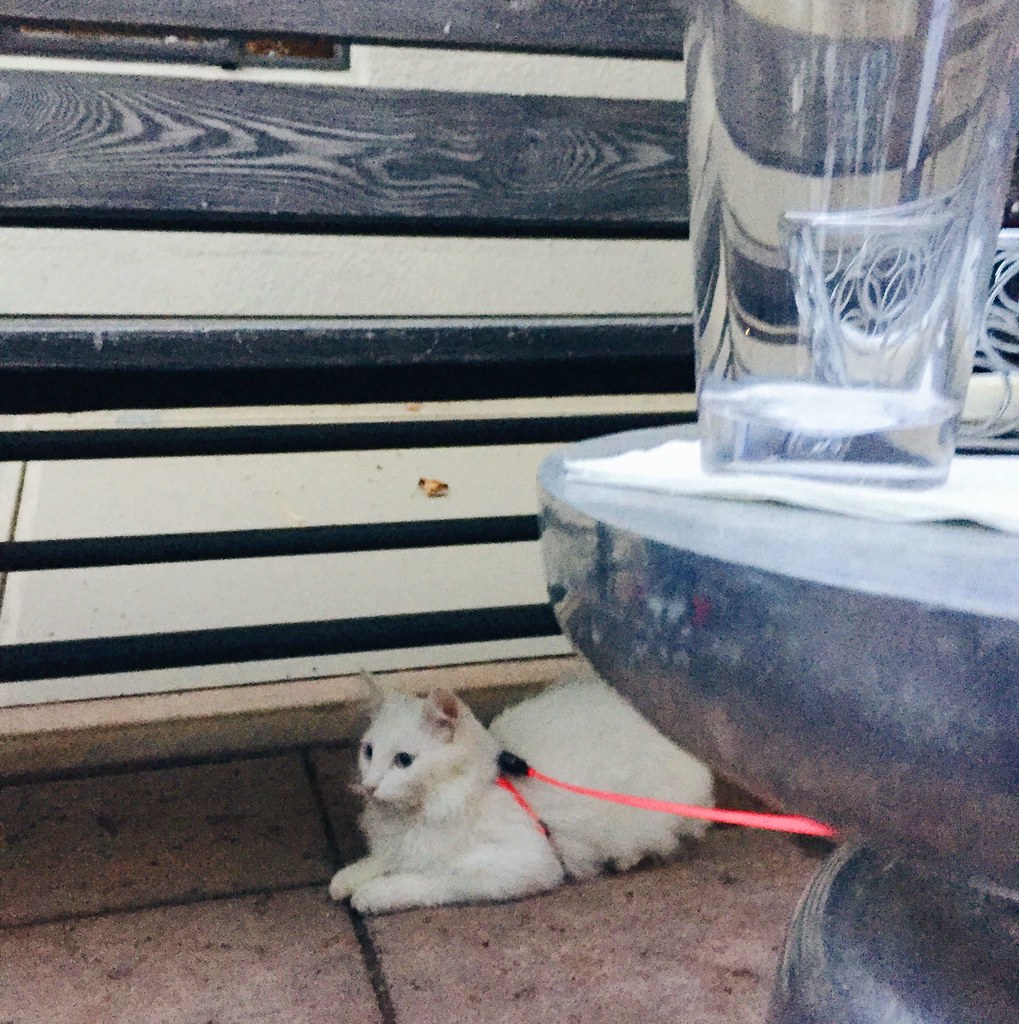 A cat! On our restaurant patio! On a leash! His human let me pet him and I almost cried out of happiness/excitement as I walked away. He’s deaf, so his human was telling me how she thinks that’s probably why he’s so chill when out and about like this. 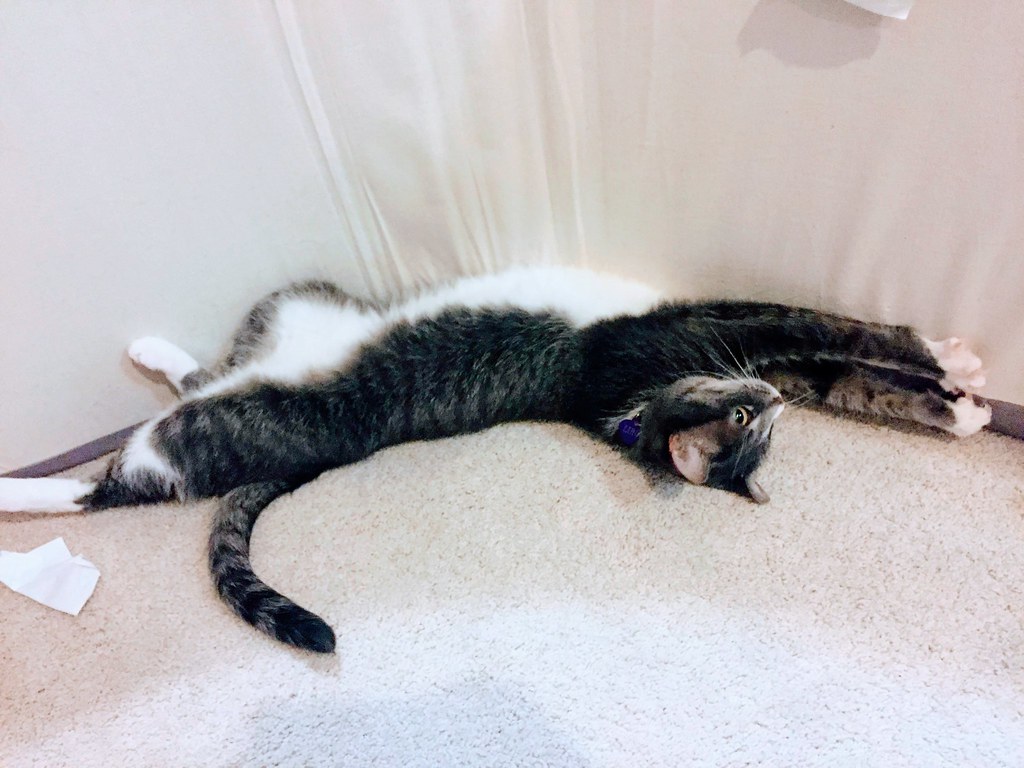 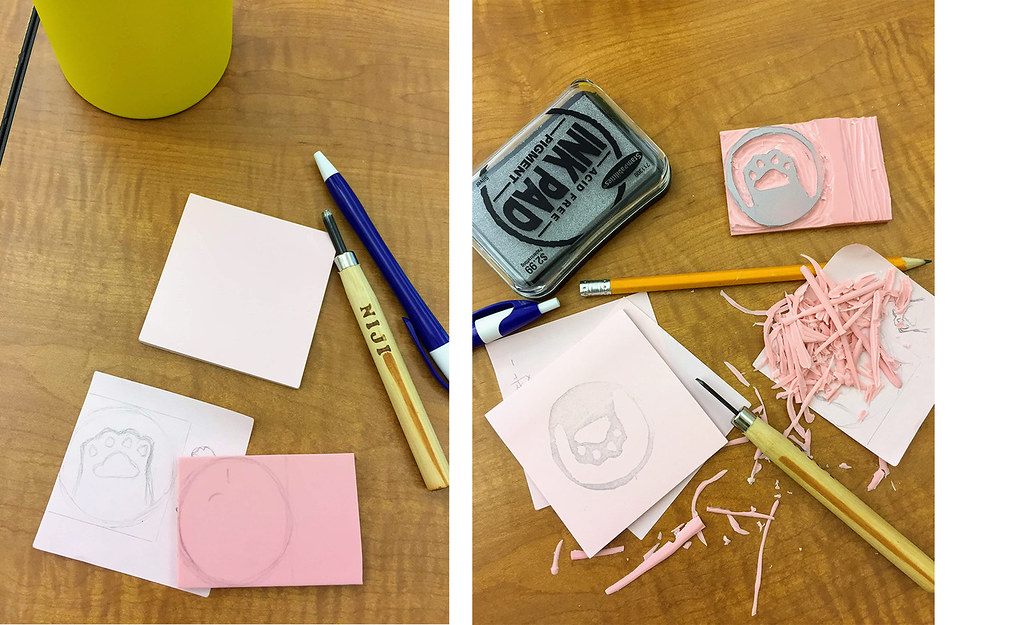 I’m taking a history of graphic design class this semester and I’m super excited about it since it’s a little lighter on the history and a lot more hands on than I expected. The other day we made stamps! The inspo for this work of art is Pusheen’s paw from the Facebook sticker pack lmao 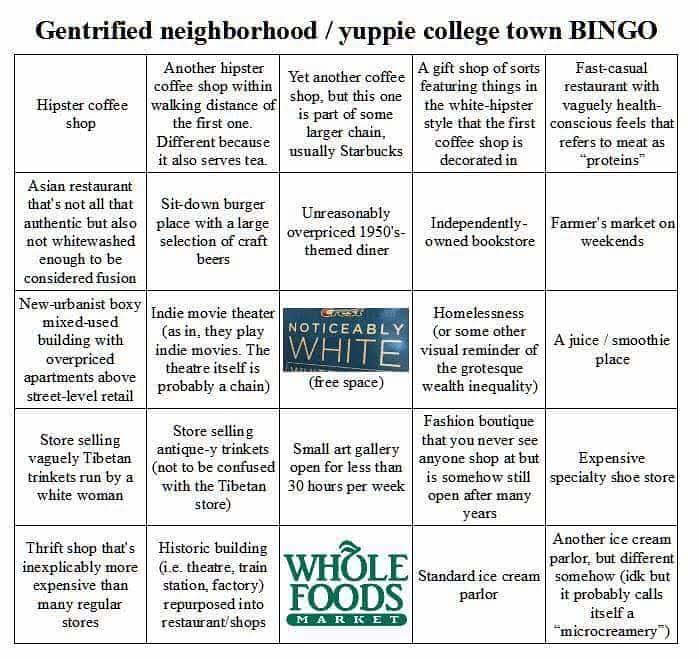 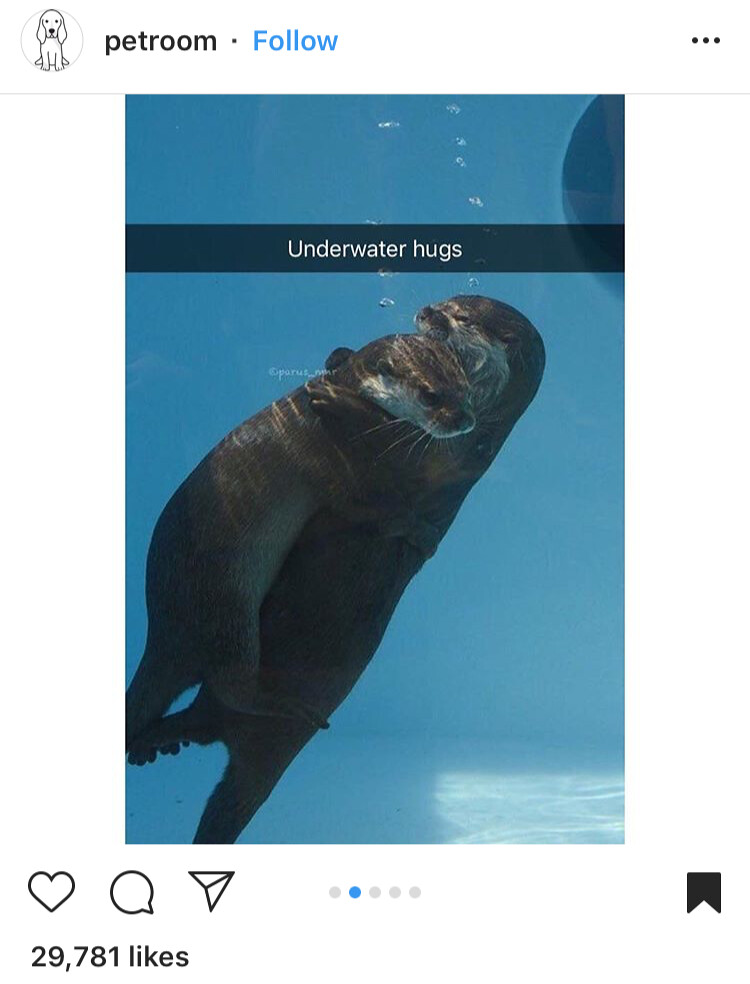 The gentrification meme is a sad note to leave off on, so here are some otters hugging so we can be anti-being a dick and have some otter love hope inside us. Here’s to October being good to us all 🍂