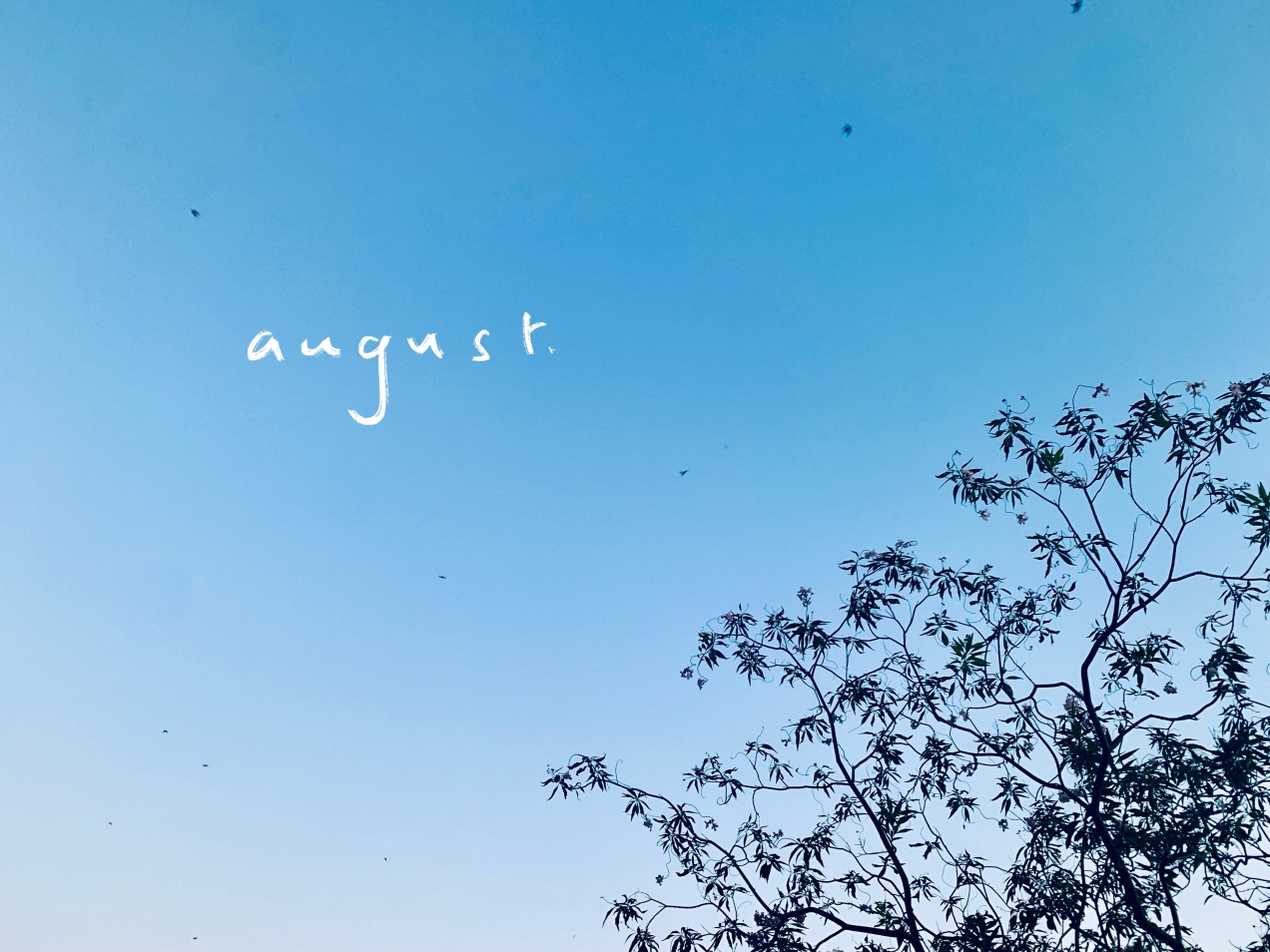 When I was younger, I had a diary which I only ever remembered to write in when I was feeling some huge emotion and needed to let it out. Usually it was something I was struggling with, and so I always thought that if I ever looked back, I would just see a collection of Very Bad Times and think that I’d lived a Very Bad Life. I’m a little worried that that’s what this blog has become, because this is yet another month where it seems like the biggest thing on my mind is a Bad Thing. It’s natural for our stupid little human brains to latch onto the negative things, so I wonder if that’s what I’m doing. Am I only remembering the bad things? Or am I really just being dealt a shit hand this year? I’m not sure. August had good things in it. I saw friends, I laughed, I got a job (temporary but exciting!), I ended my student job which taught me a lot, I felt grateful for where I was. And then I learned something at the end of the month that completely blindsided me, left me feeling unmoored, and made Olivia Rodrigo’s album feel like a kindred sister.

But in the spirit of not only talking about the bad things that have happened, here is a small but mighty thing I did near the end of August: I told not one, but TWO men at the gym to wear their masks properly! After a month and a half-ish of going to the gym and fuming silently at all the people near me who would run and pant and grunt with their face dicks out and mouths spraying shit everywhere, thinking about all the correlations in the data between anti-maskers and anti-vaxxers and anti-sciencers, I thought: hey. Maybe I should go ask them if they can put their masks on? The results were, unfortunately, unsuccessful. Man Number 1 had his mask on his chin while running on the treadmill, and then he said “sorry” when I asked and put it on over his mouth. A few days later I saw him again, doing the same thing. Man Number 2 had his mask on his chin while doing kettlebells with his partner (they also kissed after each set which like… come on, guys. Keep it in your pants. You don’t need to kiss after every set in the middle of a panini gym), and then I don’t think he actually heard me and kept going. Regardless of outcome, I’m really proud of myself for doing that. It was hard and scary! I’ve never gotten into a fight before and I’m generally very scared of confrontation, but I think if there’s a public altercation hill I’m willing to die on it’s community health and wellness.

Anna Marie Tendler’s photography: I think I’ve mentioned Anna before on this blog, probably when I first watched John Mulaney’s stand-up comedy and being like “Also, he has such a cool, talented, skilled, interesting person for a wife!” Well, uh, if you keep up with celebrity gossip like I do, you know that they’re divorcing and John is now dating Olivia Munn. Men ain’t shit! Jay Z cheated on Beyoncé! John Mulaney fucked Anna over! But I digress. The point of this is not to bemoan how men generally treat their female partners terribly. The point of this is that Anna’s photography is, like her lampshades, so so lovely. It’s beautiful and lonely and haunting and somehow comforting in its gut-wrenching nature. I’m generally not very impressed by photography — and maybe that’s just because I’m uneducated about it. In any case, it’s not a medium I easily connect with. I don’t tend feel anything beyond “cool shot” when I look at photographs, online or in-person at galleries, but I’ve definitely seen paintings which wallop me over the head and demand I stare at it for thirty minutes. Anna’s photography feels like that. I wish I could see them huge, covering a wall, and not on my small little phone. I wish I could stare at them for hours with my earphones in, listening to sad music like The National, or just the clicks of people’s shoes against the floor. I wish I could quietly tear up in front of it and then walk out into cold, brisk air while muddling through the feelings that rose up on my way home. Here are some of my favorites: A Room That Once Was, The Empress, They weren’t the good plates. 5 out of 5.

The Twilight movies: My brother and I decided to watch the Twilight movies to help distract me a bit from the bitterness you’re probably picking up from this post. Y’all, how did these movies and books collectively entrap us all those years ago? They’re a mess! They’re a steaming shit pile of racism, sexism, anti-abortion, colonial propaganda! The Native people are literally animals who can’t control themselves! Stephenie Meyer used a real tribe, the Quileute nation, without permission, without consulting them, without giving them any of her profits. Real white woman shit. The vampires are all white and civilized and smart and call the Native Americans “mutts”. I mean, what the fuck! The anti-abortion, celibacy until marriage evangelical Christian stuff was always obvious, but I was still surprised at just… how awful it was? Like, Edward breaks the fucking bed while he and Bella are fucking on their honeymoon. And then when she has bruises the next morning, he’s all tortured and self-flagellating, but the man’s been alive for 100+ years, hasn’t he heard of BDSM aftercare for impact play?! Then he just leaves the bedroom in a mess of broken furniture and feathers for the housekeepers to clean up, when he’s a vampire with super strength who doesn’t need to sleep; in other words, he has the time and the capability to at least help with the clean-up?? 1 out of 5. I enjoyed the Breaking Dawn: Part 2 fight scene. I repent for having an email in middle school referring to my love for Twilight.

Hannibal: This is the single most surprising development in my TV-watching history. Me, into horror? Apparently yes, it just has to be really gay. So here we are! Hannibal is the NBC TV series that aired from 2013-15 based on characters from Thomas Harris’ novels, which most of us know from the movie The Silence of the Lambs. The show focuses on the relationship between Hannibal, our titular cannibal, and his not-a-psychiatry-patient-just-a-conversation-partner Will Graham, our sweet fucked up empathetic FBI profiler. I’m enthralled. I’m halfway through season 2 already. Will is such a sweetie pie. He’s trying so hard. And for what? He’s treated so awfully by everyone around him. Can’t someone just take care of the poor man and understand him and help him with all his stray dogs? It truly leaves me no choice but to see Hannibal as the best option for the role of life partner, because everyone else is simply a dick. The visual style is beautiful. Hannibal — the character, not the show — has such a magnetic aesthetic sensibility, from his suits to his office decor to his dinner plating. Hannibal — the show, not the character — is so good at having there be blood and body bits, but not making it grotesque in the way that some other shows really lean into (I’m thinking of The Boys here). Mads Mikkelsen is always a treat to look at, and it’s mind-boggling how he can make his face do so little yet so much at the same time. He has such an interesting face. This is an awkward way to put it, but I wonder why he’s so nice to look at? It’s not what I’d describe as conventionally attractive, not in the way that Hugh Dancy literally looks like a classic Disney prince, but I cannot tear my eyes away from Mads and I want to make sense of it! Hugh Dancy does such a good job of looking rather dirty and grimy, but almost cherubic at the same time. Ugh, it’s so good. So good! So, anyway, 4 out of 5. One star off because I’m a scaredy cat and can only watch this during the day time, which doesn’t give me much time to actually watch it given the existence of a work week.

Daechwita Korean Music Fest by Arirang Culture (after listening to the song, I wanted to know what the traditional daechwita sounded like)

These People Who Work From Home Have a Secret: They Have Two Jobs by Rachel Feintzeig for The Wall Street Journal

You 2.0: Cultivating Your Purpose from the Hidden Brain podcast

Apparently, gusset width is a problem! I saw a video on TikTok from Cherri that I have not fact-checked (but it seems plausible enough given, you know, patriarchy) that said that the width of the crotch area of underwear tends to be way smaller than the average vulva size. Who knew! How many lip slips could have been prevented?!

I am very hesitant to pay $26 for a pair of underwear, but I’ll keep you posted. I know, I know, ethical and sustainably sourced materials, transparent business practices. But I raise you intergenerational trauma around money.

Another TikTok discovery – Bared, a shoe company founded by a podiatrist which has a huge amount of positive reviews for comfortable heels.

Pricing around $200, so perhaps I’ll revisit this in a year or two when I feel like that’s not a wild amount of money for shoes. Gorgeous things, to be sure, but… money.

The Woks of Life

A family of 4 Chinese cooks (some home, some professional) sharing recipes. I’ve only used the basic bok choy recipe so far, and I hope to learn more. In my family, my mother does most of the cooking, but she’s an awful teacher – so I was really excited to find this blog. I hope I can use it to learn how to feed myself good Chinese food.

Photo from the hot pot recipe

Currently the Art Director of Cosmopolitan magazine, also does lettering, calligraphy, watercolor, and other art.

The below two images are also from her!

A new planner company, discovered by freakishly accurate Instagram algorithms. I’ve been using Passion Planner for the past four (4!) years, with the odd mix of Trello/Post-It notes/Google Tasks/Goodnotes/other apps and websites to keep track of shit intermittently. I’m using Notion right now, but I’m thinking of trying this one out next year if I feel the urge to return to paper planners.

Flash tattoo artist based in SF.

I’d like to get a few more tattoos in the next half year (? Timeline permitting, money permitting), so I’m on the lookout for tattoo artists. I have a few ideas in mind already but I’m not wedded to anything, but I do think I’d like to find some BIPOC artists.

OK, that’s August! I leave you with another shocking notification from Spotify. I feel like I was really late to the drivers license train, because I only listened to it after hearing friends talk about it and conversations on social media/podcasts. Then I thought “OK, let’s see what all the fuss is about”. But apparently